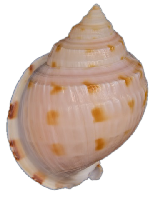 Lamont Reef,  Australia
Size: 36mm    Collected: 2019
Under rocks and coral slabs on intertidal reef. Located on weather edge of the reef. Some of the specimens are exhibiting signs of becoming melanistic.

Taurama Beach,  Papua New Guinea
Size: mm    Collected: 1984
found on coral in a crevise under a rock in about 1.5m of water about 3m from shore

Bohol,  Philippines
Size: 41.19mm    Collected: Unknown
Collected from amongst rubble on slopes under slabs at 3-5m by local divers